Nassau is, on the surface, not a very happening place for backpackers. For one thing, no one knows what I’m talking about when they ask where I’m staying or if I’m on a cruise and I tell them that no, I’m actually staying at a backpackers. The other travelers and I have gotten quite a few confused looks after saying so. I’m assuming this is due to the fact that mostly everyone who comes to Nassau stays either in a resort, or is a cruiser (this is a copyrighted term I have come up with which clearly means “cruise ship passenger”). So, that being said, when I was informed of this backpackers in Nassau called “BahaSea Backpackers” I was intrigued. I didn’t even think backpackers/hostels existed on Nassau because I just assumed it was all resorts and hotels, so my first response was, predictably….”there’s no such thing as hostels in Nassau.” I was shown proof in the form of a booking.com listing and decided that was good enough for me. Here’s where it started getting weird though…yes, right at the beginning. I couldn’t book for the number of days I wanted, blah blah, long story, I emailed them before taking matters into my own hands and just booking two separate reservations. I never got a reply. Ever. So I ended up booking again but I had a lingering fear about this place.

I had terrible anxiety leading up to my trip, fearing I wouldn’t have a place to stay when I got to Nassau, that my booking would have either been lost, or that the hostel itself didn’t even exist. I definitely could have acted like a real life adult and contacted the hostel via phone, instead of immediately giving up after my email was never answered, but where’s the fun in that, eh? Also I’m a child. So my anxiety was made even worse when I got to Nassau and I was going through customs, the customs officer had absolutely no idea what BahaSea Backpackers was. He didn’t even know what a backpackers was in general actually, just as with everyone else on this island. Anyway I was even more nervous after our fun customs chat and I began moving extremely slowly after this encounter, as if putting off the inevitable heartbreak of having to find a place to stay that was much more expensive and much less fun. I was, however, still getting ahead of myself so once I got my bag I sat down and used the airport wifi to try to figure out where I was going. Here’s the next fun thing…there is no address for the backpackers. The only address provided is “West Bay Street.” West Bay Street is freakin long, okay? It goes along the entire length of the island, the island is 21 miles (34 km) long. For those of you who aren’t good at deducing information (me) that means my directions were to a street 20 freakin miles long! Those are ridiculous directions, how am I supposed to find it? My solution was to screenshot the picture of the map they had on booking.com to show my taxi driver, I assumed they’d be able to figure it out from there. Whelp…the lady who was directing the taxis on where to go couldn’t figure it out, she got another guy to look at it…he couldn’t figure it out, so they gave up and handed me off to a taxi driver, thanks guys.

I showed the picture to the taxi driver and he asked me what number, “I don’t know.” The only information we had was that it was near Sandy Port, so that’s what we went off of. I told him I’d just look for a sign when I got there, he informed me that he had dropped people off there before and that there was no sign, great. Things are getting better and better. Once we got “there” he asked if I had a phone number for them, magically the screenshot I had taken had their phone number, so he called. They said we were in the right place and that someone would come down to get me, things were starting to look up, this place existed, yay.

Here is where I would like to go back in time a little…okay here we go. Denver, Colorado; 10 pm, April 24: gusty, rain turning into snow, cold as fck. I, being an intellectual, was dressed for the weather in long leggings, wool socks, thick boots, a long sleeve shirt, and a sweatshirt. Next…Charlotte, North Carolina; 6 am, April 25: rainy, air conditioning on in airport…cold as fck, I even bought a blanket. Side story…I actually forgot my neck pillow as I always do #firstworldproblems and it was “buy 2 for $20” so I got a blanket along with my 3rd neck pillow, BUT, that blanket was an amazing decision. Anyway….Nassau, Bahamas; noon, April 25: beautiful, birds are singing, sun is shining, my body was literally melting as I stared at these bloody stairs waiting for god knows what…

SO, I am literally dying of heat, sitting on these steps, staring straight at the sun, waiting for someone to “come get me.” Suddenly, a wild tourist appeared! In the form of a guy driving a car….exciting, I know. He gets out, I’m trying to decide whether or not he’s the one there to “get me” but he just said hi and started going up the stairs. I had a quick internal debate: “should I be normal and stay sitting here in the sun where it seems no one is actually coming to get me, or do I politely ask this stranger if I am in the right place?” Whelp, I did what any normal person dying from heat stroke would do, I formed a completely normal, well thought out sentence in my head, “hello, I’m looking for BahaSea Backpackers, am I in the right place?” I stood up, turned to him and awkwardly and excitedly yelled “Hi! Sorry! What is this place!?” Because that’s a good question for the situation, great work Zoe. He responded how you would expect any normal person to respond to a strange girl loitering outside their accommodation, face shiny and red with crazy eyes and probably even a little spit coming out of her mouth….with a very confused look on his face, a little stutter, and a “ummmm…….BahaSea?”

Okay well I burned bridges with that guy and he probably wouldn’t be hanging out with me, but I had found where I needed to go. I started following him up the stairs and he, understandably, instead, told me the office was down where I was, he obviously didn’t want me following him, I couldn’t blame him. So I followed his directions and went to the door he said was the office, it was locked…and also didn’t look like an office, so I ignored a “private property, no trespassing” sign and ventured up the stairs next to the door. There was a pool, and a little outdoor bar, and two women having lunch.

Obviously they noticed I was lost and one of them came up to me asking if I had just arrived. Personally, due to my general appearance, such as my clothing and the strong confused expression on my face, I thought that was obvious, but I simply said “yes” and she brought me to the actual office. It was in the opposite direction that the guy said, fuckin guy. I didn’t want to hang out with him now anyways.

In the office my next terrible fears were recognized and toyed with. They didn’t have my reservation written on their list of people showing up for that day. Oh my god, my stomach dropped, the world was ending, why me? I internally began going into full on meltdown when Maria, the owner, found my reservation in the computer. Cheers erupted in my head, the sun came back out, my savior, Maria, I wanted to kiss her, but that would have been weird and I was trying to dial back on the weirdness. Anyway, she brought me up to my room and I can easily say that BahaSea is one of the nicest backpackers I have ever stayed in. Despite how impossible it is to find and contact, this place is insane, I would 100% recommend this place and I would absolutely stay here again. You know how the pictures always lie? This place was exactly what it claimed to be. There are two pools 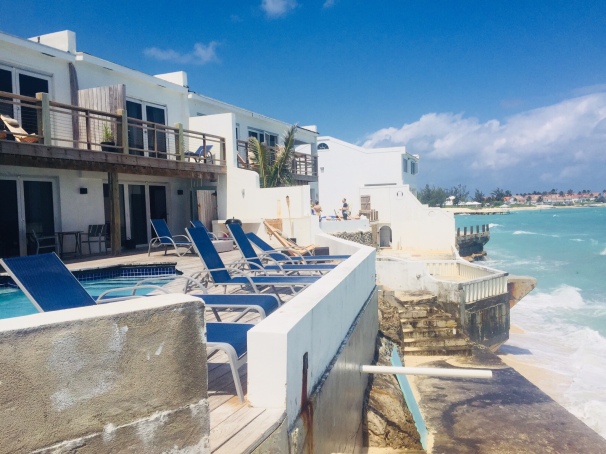 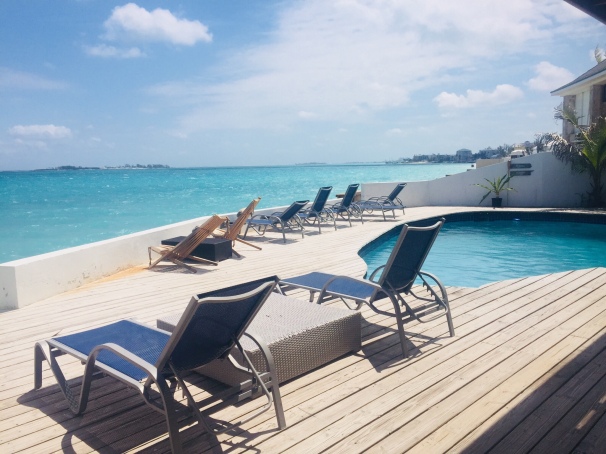 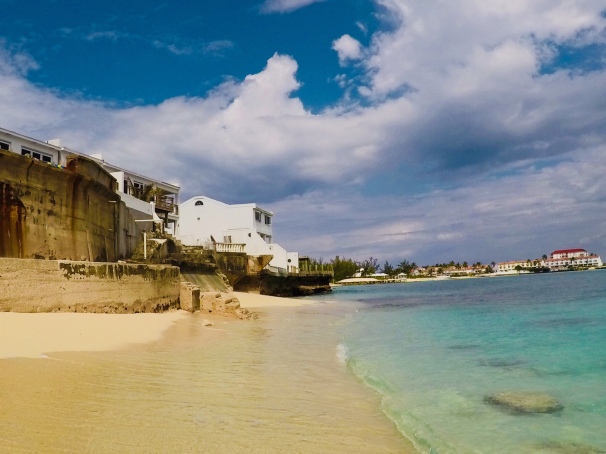 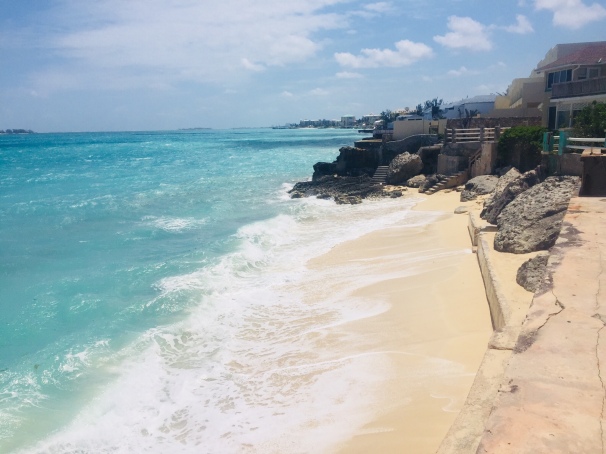 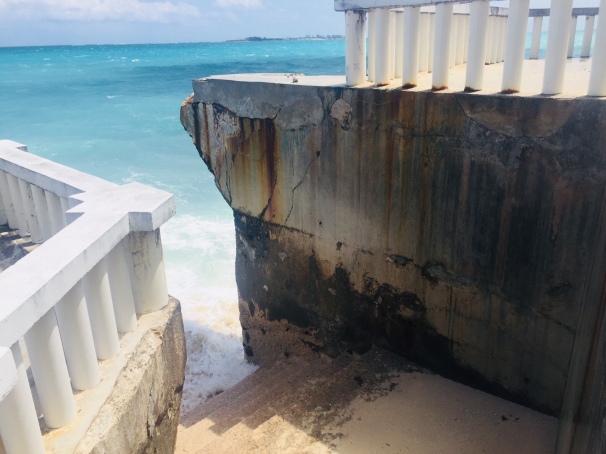 and another public beach on the other side of it.

This was taken from the balcony of the hostel…perfect walking distance.

It’s beautifully clean, has two quite large kitchens, (this one was the kitchen next to my dorm) 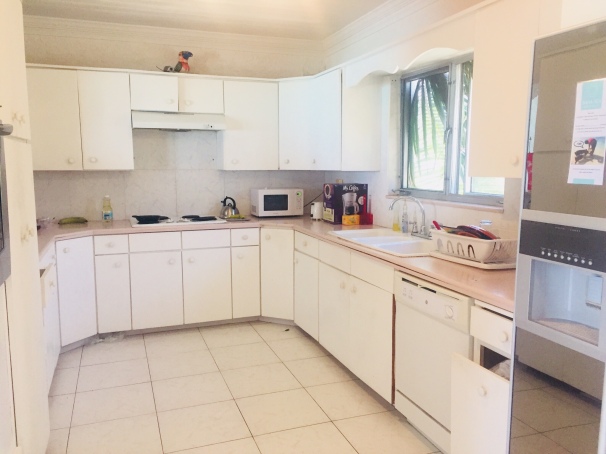 and did I mention it’s right on the water? Or is that more information that could have been deduced? Either way…it is. 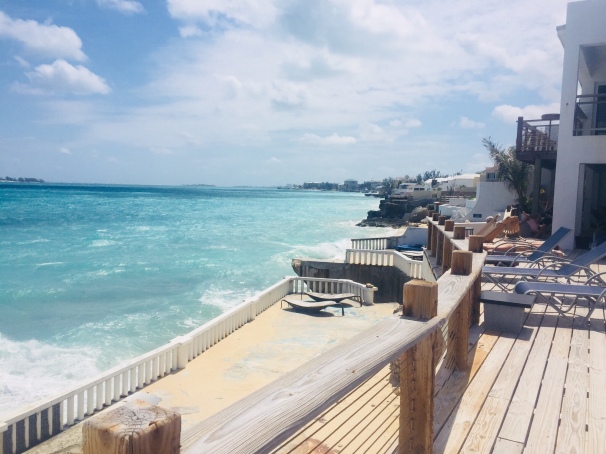 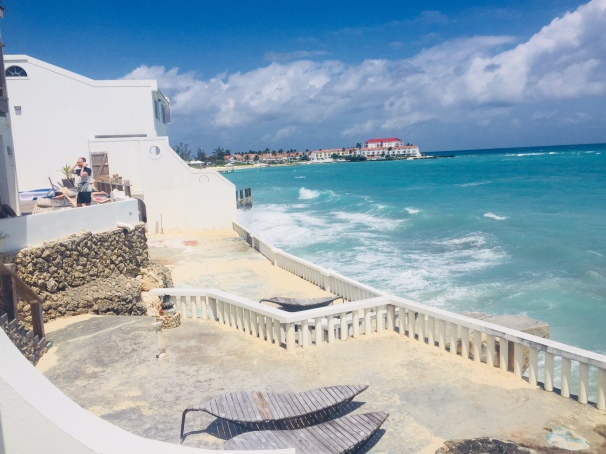 Perfect views of the ocean. It is the most expensive hostel I’ve ever stayed in, but for only $35-45 USD per night, this place is a gem. There’s a supermarket right down the road, only a five minute walk, and a Wendy’s and an awesome pizza place. There have been a few drawbacks, such as no water for a whole day, and a constantly low supply of toilet paper, but Akeem and Maria do their absolute best to keep everything running smooth. It’s also quite obvious that this is somewhat a new place, there are a few things unfinished on the outside, but these are superficial things which don’t actually have any effect on the stay.

There are awesome outdoor areas,

and comfortable indoor areas for if the weather isn’t cooperating (along with a million outlets! HUGE plus for a hostel, us backpackers always need to charge our shit).

I was staying in a 10-bed female dorm, and my first few nights there weren’t any boys staying in the 10-bed boys dorm next to it, but we finally got some guys in there. However, this must be some sort of sanctuary for ladies, because the female dorm was overbooked so they turned the male dorm into a mixed dorm. I thought about taking pictures of the boys/mixed dorm, but I’m trying to dial back on the weird, so instead I stuck with just my room 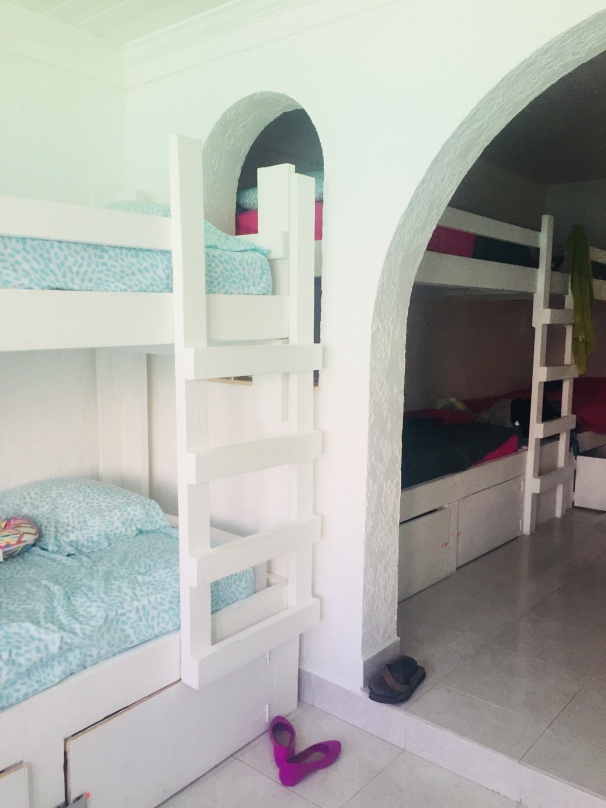 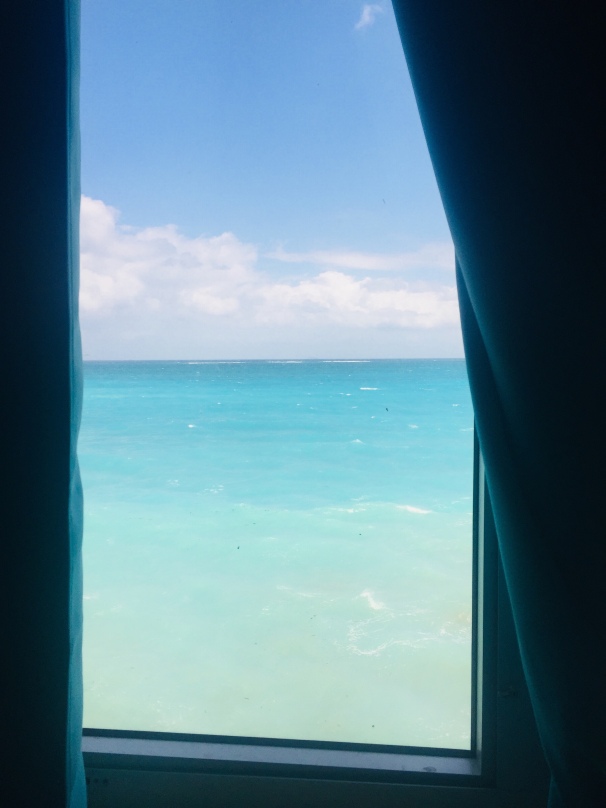 Anyway, I know I’m not that important but, I can’t endorse this place enough, the bus picks up right out front for a 15 minute ride to downtown which only costs $1.25, and it’s a comfortable, safe, welcoming atmosphere which draws some very cool people, myself included ha #lovethyself.

The hardest thing for me about staying in this hostel? Forget the lack of toilet paper or water, forget how hard it was to find or contact, forget the price, the hardest thing for me here is going to be saying goodbye to all of the amazing people who were drawn to this hostel as well. This place has great views, yes, but most of all it has a great vibe and a great community of travelers. 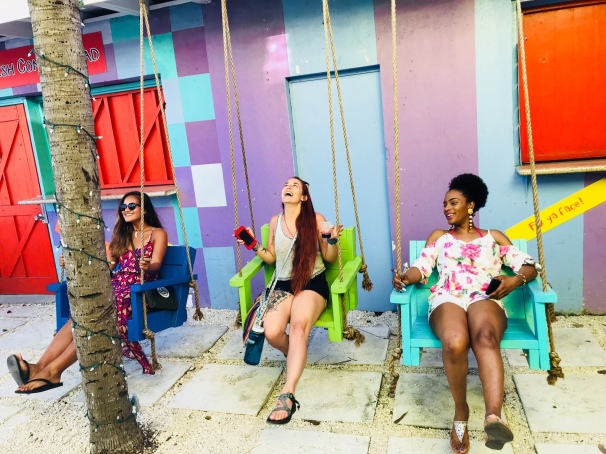 2 comments on “BahaSea: An Ode to the Hidden Bahamian Hostel”